REBALANCE: ABOUT THE PROGRAMME;

ReBalance is a pioneering 3 year programme which will provide one week’s studio recording time to a core** female band, female musician or female solo artist each month in 2018, 2019 and 2020. As well as the studio and engineer, they will be provided with accommodation and travel (applicants must be based within the UK) which will be covered by Festival Republic. At the end of the year, Festival Republic would commit to giving these successful acts a slot at a Festival Republic or Live Nation Festival. In addition, we’ll be supporting women who want to work in sound engineering and production by offering studio apprenticeships.

In the recent Women Make Music Evaluation carried out by PRS Foundation, it was highlighted that women represent 16% of UK songwriters and composers and that there is a lack of women in other roles across the industry e.g.“…Engineering, in particular, is viewed as an almost entirely male ‘closed shop’.” ReBalance responds to this by supporting both artists and up and coming female engineers in a programme which offers valuable studio time and industry support. The aim of the project is to strengthen the talent pipeline and progression routes for female artists and engineers.

Artists and engineers will be nominated by industry experts (labels, managers, streaming services, publishers, promoters, agents, journalists, etc.) who will be invited by Festival Republic and PRS Foundation to nominate their choices. A selection panel will then shortlist and select the successful artists and engineers from this nominated shortlist. The selection panel will change over the year in line with availability and demand. 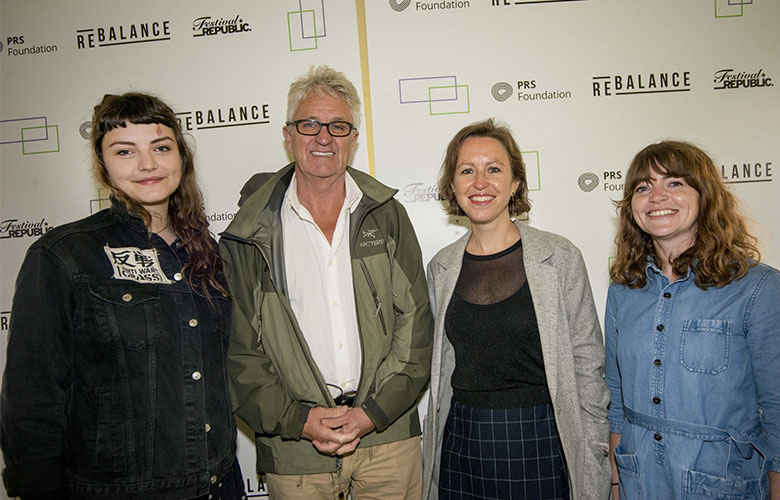 There will be two chosen apprentices over the three year programme. During the first 18 months they will work with engineers in-house at Old Chapel Music Studio (based in Leeds), during the second 18 months of the programme they will be the lead/co-engineers on the project.

“Something needs to be done about gender equality in the music industry. It’s a wider issue that involves us (the live industry) but the solution doesn’t rest only with us. I have decided to be proactive in changing and working towards this no longer being an issue in the future, and that’s what this project is about.

We’ve been working closely with PRS Foundation and their Women Make Music programme, alongside Old Chapel Studio in Leeds to pull together this exciting new initiative. ReBalance will enable future, and current female musicians within the industry, to have the support they need in order to be recognised.

There is a significant lack of female acts with recording contracts and indeed airplay – it’s quite astonishing. Artists like Maggie Rogers, Halsey, Zara Larsson, and Ray BLK are all playing festivals and succeeding in the music industry, so in that respect there has been a surge comparably to previous years – but all these artists have a very mainstream presence. Mainstream pop doesn’t seem to have an issue, but the festival environment caters for all genres, hence this being a wider problem. Shockingly, there has been only one UK no.1 single this year from a female solo artist (Ariana Grande – One Last Time).

Only 16% of UK registered songwriters are women – and that is a massive issue. 79% of the applicants to the Women Make Music programme have said the support they had, had a significant impact on their confidence – which proves that targeted approaches like ReBalance may well be the answer to correcting this imbalance.

This is a project that gives a step up from start to finish. I am also committing to a performance slot on a Festival Republic or Live Nation festival, for each of the acts who come through the ReBalance programme”

“The evaluation of our Women Make Music fund highlighted the ongoing challenges for female artists whilst also drawing attention to the lack of women working in other industry roles including the recording studio. Low representation of women in these aspects of the creative process is an obstacle for female artists as well young women who are considering a career in music production.

I’m delighted that Festival Republic are responding to this by offering new opportunities which will support female artists alongside younger women who want to develop skills in music production and sound engineering. I’m also pleased that this is happening in Leeds, acknowledging the importance of promoting infrastructure and opportunities for talent development outside of London.

We look forward to helping Festival Republic to deliver this important and exciting programme and to following the results of the monthly studio sessions planned. We need more male leaders like Melvin Benn to recognise the ongoing gender gap in music and to use their position to do something about it. Coming up with campaigns and initiatives like ReBalance, will ultimately strengthen our industry and be of benefit to us all.”

“Being a woman in a band ain’t easy. Let’s face it, guitar music is male-dominated and it seems like the wider music industry is hardwired towards men – even the fact that people often feel they have to refer to our band as being “female-fronted” feels wrong (who ever referred to Arctic Monkeys as a “male-fronted” band?!).

This imbalance is probably most obvious in the live world. Just looking at the majority of festival line ups will show you just how underrepresented women are, something that’s highlighted time and time again in the media.

ReBalance is important because it looks to tackle this issue in a long-term way. Rather than just sticking a few female artists on some bills as a token gesture, it will provide support for the things that actually matter to an emerging artist – studio time, travel, accommodation, practical advice etc.”

This is a wonderful initiative and all of us at Leeds Music Trust are really excited and proud to be a part of this fantastic and much-needed programme. We support many young and talented female artists at our studios and through ReBalance we are looking forward to welcoming not only more talented artists from across the UK, but also improving gender diversity within our own structures, which we know is integral in this very male dominant sector. Old Chapel Music Studios has a great history. It is a true institution of the Leeds music scene and we are delighted to continue our relationship with Festival Republic in what will be an exciting new chapter, delivering the first programme of its kind in ReBalance”

* the definition of female, in the context of this initiative, encompasses all those who identify as women
** A band featuring women in the line-up, with that woman/ women being fundamental to the writing or producing duties.